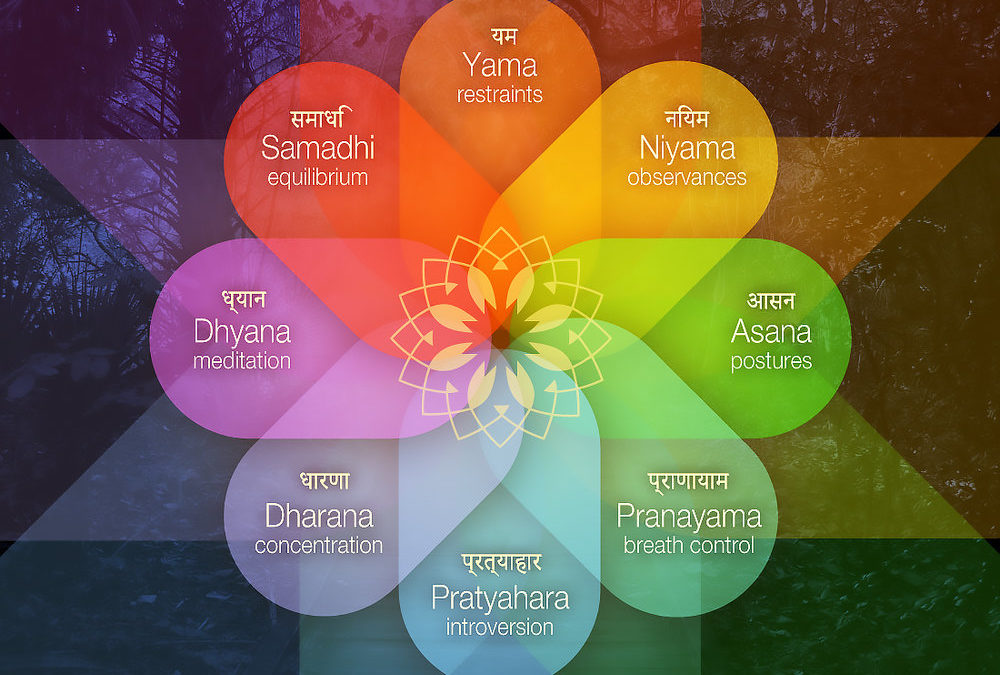 An Introduction to the Eight Limbs of Yoga – Part 1

Are you only practicing one-eighth of yoga?

I’ve been wanting to do a series of posts on the Eight Limbs of Yoga, specifically, the first two limbs, the Yamas & Niyamas.

If you aren’t familiar with the eight limbs of yoga, that’s not surprising. In the modern, western world, yoga is focused almost entirely on the third limb, asana. That’s right, when you show up on your mat every day or every week, you are practicing one-eighth of what yoga is about. This is not to lessen the importance of the physical practice of yoga, but to introduce and explain the importance of the other seven limbs.

This series is not going to be in any particular order, nor is it going to be a specified number of weeks in a row. It’ll simply show up, based on what I am experiencing, reading and contemplating in my life at the time. I hope to begin to answer the questions of where do we pick up after we pick up our yoga mats? How can we cultivate the feeling that yoga brings us, in our everyday lives? How can practicing yoga both on and off our mats bring us greater contentment, peace and joy in our own lives? How can it help us to help others and become better stewards of the planet?

Deep questions, I know. I am not attempting to answer these questions for you, but to introduce you to a pathway to begin answering them for yourself.

The Eight Limbs of Yoga

The Yama & Niyamas – The First Two Limbs of Yoga

Put simply, the yamas and niyamas can be thought of as ethical guidelines for living. They are the foundation of yogic thought. The yamas are defined, variously, as restraints, moral qualities, self-regulating behaviors or attitudes towards life. They are about how we treat other beings and the world around us. The niyamas are described as observances, personal practices and an evolution towards harmony within ourselves. Put very simply, the yamas are about how we relate to the world and others; the niyamas are how we relate to and evolve ourselves.

If you’re wondering where these guidelines came from and who the heck put them together, they were compiled by the sage Patanjali, approximately 2,500 years ago, into the spiritual text known as The Yoga Sutras. Patanjali is not the author, but the editor or compiler of the sutras. Prior to Patanjali, they had been taught and passed down orally, from teacher to student for millennia. There are many different translations and interpretations of the Yoga Sutras. The closest comparison of a text that I can think of is the Bible. The sutras are a series of short threads or verses that explain how to live a yogic life. Like the Bible, they are sometimes difficult to grasp and have been interpreted many different ways. Unlike the Bible, the sutras were meant to evolve and change with the times and circumstances. While they were originally meant for saints and ascetics, they can and should be adapted for the 21st Century householder (us). Also, unlike the Bible, they are not dogmatic and not meant to be taken literally. Interpretation is allowed and encouraged.

There are five yamas and five niyamas. We are instructed to practice them in thought, word and deed.

Even as I write, I want to say so much more. These one or two word definitions just barely scratch the surface of what the first two limbs of yoga are all about. But, I don’t want to overwhelm. I know that many yoga students and teacher trainees get overwhelmed when starting to study yoga’s deeper texts and philosophy. I certainly did. It took me years to “get” what the yamas and niyamas were really about, and still, I am no expert. But, I do feel that I have a pretty good working understanding; at least enough to share in a (hopefully) helpful way.

As I continue this series, I’ll delve deeper into the individual yamas and niyamas and share how I’ve incorporated them into my life. I’ll give suggestions for you to do the same.

If this subject lights you up and you can’t wait for more, there are some resources below. If you want to dive deeper, you’re probably a good fit for my yogi-mentoring and yoga teacher mentoring. I love helping yogis fit these ancient teachings into their modern lives and seeing how their light begins to shine brighter and brighter. I’m offering all of my readers a free, 30 minute yogi-coaching session, to chat about mentoring and see if I can help you find what you are looking for in your yoga practice ~ on & off the mat.

Here is a list of a few of my favorite, user-friendly books on the subject:

The Yamas & Niyamas by Deborah Adele
True Yoga by Jennie Lee
The Secret Power of Yoga by Nischala Joy Devi
Do Your Om Thing by Rebecca Pacheco
The Tree of Yoga by BKS Iyengar (slightly more advanced, or old-school, depending on how you look at it).

Well, there’s a little yoga philosophy for you to nibble on. I’ll go deeper into one or two of the yamas next time. PS – I don’t know how many times I have to type yamas, before my auto-correct stops changing it to yams! So, if it says yamsanywhere in this post, I apologize!